Honda launched the first official exterior look at the production 2022 Civic Sedan on April 14. Mass production preparations are near completion at Honda of Canada Mfg. in Alliston, Canada. Previewed last November with the Civic Prototype, the 2022 Civic Sedan aims to be the most technologically advanced sedan in the model's nearly 50-year history. 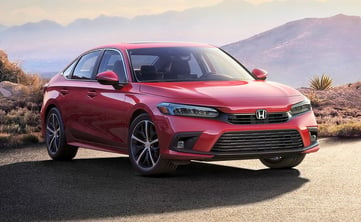 Dealerships are scheduled to get the new Civics in showrooms this summer, and an all-new Civic Hatchback will follow a few months later.
The designer’s goal is to increase the driver's ability to enjoy the car safely. The result is a sporty new look and sporty interior.
Social media is abuzz as the Honda Civic Tour returns on April 28. For its 20th anniversary, Civic Tour is going virtual this year, with two tour stops. The April 28 headline event will be live streamed on the Live Nation Channel on Twitch and the second stop will be live streamed on the Honda Stage YouTube channel this summer. Starting at 5:00 p.m. PT, the April 28 virtual concert event on Twitch will also give Civic Tour fans a special first look at the all-new 2022 Honda Civic Sedan around 6:00 p.m. PT, leading into the performance.
For more information on using video Honda and Toyota virtual test drives at your dealership, on how to use Twitter or to set up a video blog, please reach out to Doug Thompson at VehiclesTEST.com (954-629-2242).

Would you like to learn how VehiclesTEST’s videos can work for you?

Founded in 2007, VehiclesTEST is a full-service production company that produces independent video test reviews on cars, trucks and SUVs for dealerships to increase new auto sales.

VehiclesTEST uses Flick Fusion's SMARTFLICKS as its video hosting platform, and the HTML5 player is the most effective way to stream videos online, for display on mobile phones and desktops/laptops and tablets.

We are partners with www.testimonialbuilder.com a great company that helps businesses gain exposure to potential customers with video testimonials. Their app available for iPhone and iPad or Android makes it easy to film and syndicate video testimonials from happy customers. Build positive online exposure and impact new buyers by creating personal references from people who have done business with you and share it across social media.