Toyota announced that it is using its motorsports activities in Japan to develop a hydrogen internal combustion engine. The engine will be used in a race car based on the Toyota Corolla Hatchback that will compete in Japan’s Super Taikyu Series. This represents a big step for Toyota as it continues to pursue alternative fuels such as hydrogen to help reduce greenhouse gas emissions from motor vehicles. 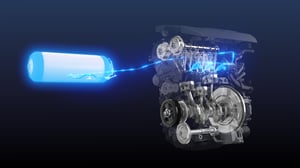 While the Toyota Mirai already uses hydrogen fuel cell technology, a hydrogen internal combustion engine (HICE) is much more similar to a conventional gasoline engine. With appropriate tuning a HICE can result in a virtually zero-carbon-emissions vehicle without having to convert the hydrogen into electrical energy and then drive an electric motor. A hydrogen internal combustion engine also maintains the sound, vibration, and feeling of a gasoline engine, which provides more enjoyment to the driver.

No plans have been announced to bring this technology to a production vehicle, but it is possible that this is a first step towards that goal. Toyota already has experience mitigating the unique safety issues of hydrogen power because it has produced and sold the Mirai for many years, so a production HICE vehicle is certainly feasible.

For more information on using video at your dealership, on how to use Twitter or to set up a video blog, please reach out to Doug Thompson at VehiclesTEST.com (954-629-2242).

Would you like to learn how VehiclesTEST’s videos can work for you?

Founded in 2007, VehiclesTEST is a full-service production company that produces independent video test reviews on cars, trucks and SUVs for dealerships to increase new auto sales.

VehiclesTEST uses Flick Fusion's SMARTFLICKS as its video hosting platform, and the HTML5 player is the most effective way to stream videos online, for display on mobile phones and desktops/laptops and tablets.

We are partners with www.testimonialbuilder.com a great company that helps businesses gain exposure to potential customers with video testimonials. Their app available for iPhone and iPad or Android makes it easy to film and syndicate video testimonials from happy customers. Build positive online exposure and impact new buyers by creating personal references from people who have done business with you and share it across social media.